Gosh, it’s already mid-February!  And it’s time to profile our next Olympic hopeful to show what it is like to train like elite athlete. 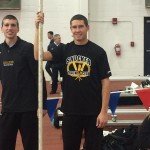 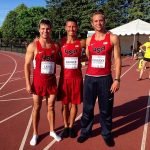 He is from Wichita, Kansas, and is a Decathlete!  At the recent WSU Herm Wilson Indoor he set a new personal best in the pole vault with a clearance of 16′!

His weekly training looks something like this: Monday is typically a light day. It usually involves a tempo workout, a few plyometrics, and a series of hang cleans and dumbbell snatches. Tuesday is a speed endurance type workout and sprinting. Speed endurance consists of multiple distances ran at a particular high intensity level with resting periods in between each run. Wednesday’s are either off or light distance runs and upper body lifting. Thursday is another sprint session followed by plyometrics and a hill workout. Friday is 1000 meter (for indoor) or 1500 meter (for outdoor) training and lower body lifting. Aside from the workouts, Austin does event work throughout the week. He throws shot put, discus, and javelin at least once each week. He high jumps and pole vaults once per week and long jumps once every other week. He will typically try to fit in two hurdle sessions per week.

For his diet, he tries to stick to a pretty basic diet. He eats a lot of meats and carb based foods. He makes fruit smoothies and tries to get most vegetables in at dinner. Austin eats a decent amount of food at breakfast, a softball size amount of food for lunch before practice, typically a smoothie as a snack after practice, and a large dinner.

Austin will be competing at the USATF Indoor Combined Events Championships Meet in Crete, Nebraska on February 26-27, 2016.  Please follow and support Austin on his journey to Eugene!

Do you have a question about health, fitness or nutrition? Send it to Ask Laura, at futurist@shockertrackclub.com

Laura Markuly, MSE, ACSM HFS, NASM CES/PES/GFS, is and Exercise Physiologist and the owner of Bodyology Sports Performance, LLC. She also serves as the Futurist and Volunteers Chair for Shocker Track Club.