The Shocker Track Club is pleased to announce the selection of Board Members, Board Officers, Functional Directors, New Members, and Administrative Appointments for the 2018 – 2019 year.

The Shocker Track Club is a proud supporter of Wichita State University Track & Field and Head Coach Steve Rainbolt’s amazing fundraising activities!  But we need your help to help them!

Here is the flyer for the first ever Bolt 2017 Golf-banquet flyer.  This is in conjunction with Coach Rainbolt’s Golf Marathon and Scramble on October 30th at Willowbend Golf Club.  Thank you for your support!

Shocker Track Club is pleased to announce of the renewal of sponsorship agreements for 2017-2018 with local organizations Hiland Dairy, Westar Energy, and Envision, and a new agreement with the Dylan Hartnett American Family Insurance Agency !

Envision, a Wichita-based organization with a national reach, helps improve the quality of life for individuals who are blind or visually-impaired, sponsors the STC Volunteer Group.  STC and Wichita State Track and Field sponsor “Envision 100m Dash” races for blind/visually impaired athletes at one meet annually.

The Dylan Hartnett American Family Insurance Agency, an Augusta, Kansas based insurance company, offers dependable auto, home, business, health, and life insurance, sponsors operations expenses of STC.  Owner Dylan Hartnett is a former member of the STC Elite Team, is a Board Member and Director of the STC Open Team.

If you are looking for a fun opportunity to assist in the facilitation of a Wichita State University Track and Field meet, we’ve got a deal for you!  Actually three (3) deals!  Wichita State University will host three T&F meets this spring – April 13-15, May 5, and May 12-14 – at Cessna Stadium.  Volunteers are provided with an event t-shirt and meals and beverages.  We need you!!

Gosh, it is a lot of work planning and facilitating an event, hence the delay in posting the news and results from the Summer Jumps Fest!  Complete results, photos, and a video compilation will be posted at www.STCJumpsFest.com.

The Shocker Track Club (STC) is pleased to announce that Envision, Inc. is sponsoring its Volunteers group. The mission of Envision is to improve the quality of life and provide inspiration for the blind and visually impaired through employment, outreach, rehabilitation, education and research. Envision is one of the largest employers of the blind and visually impaired in the United States. Through this partnership, Envision is expanding its community involvement and support for WSU programs. The nonprofit organization will have the added benefit of reaching a broad cross-section of the community to build awareness of programs and services offered to youth and adults with vision loss, regardless of their ability to pay.

Darren Muci, Shocker Track Club President, stated, “We are honored that Envision has partnered with us to support our Volunteers group. Its logo will adorn our Volunteer t-shirts, and its banner will hang at the Shocker Track Club and Wichita State Track and Field meets!  We also look forward to scheduling track events for adults who are blind or visually impaired at future STC events. Visit www.envisionus.com to learn more about Envision.

Shocker Track Club is pleased to announce a sponsorship partnership with its web designer, 94 West Design, for 2016!

Darren Muci, Shocker Track Club President, stated, “We are honored that 94 West Design is able to sponsor our club!  94 West Design has a strong history of sponsoring fitness-based organizations with a “kid specific” focus, and we are pleased that they are supporting our youth track team.  Additionally they will make a donation to our club for every referral for website development.” Visit www.94westdesign.com/STC for details!

It’s an OLYMPIC YEAR!!! We at Shocker Track Club always get excited every four years – especially for our Elite Team Athletes! Each month we will be spotlighting some of our Olympic hopefuls to show what it is like to train like an elite athlete.

If you are reading this for insight into your New Year’s Resolution, keep reading! Sometimes when you really want to achieve your goal, you just have to buckle down and train like an athlete. There will still be a workout and some recipes posted under the respective sections. Hopefully you will find some inspiration following these athletes. 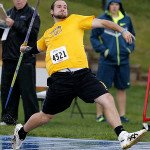 He is from Wichita, Kansas, and throws the Javelin. He attended Wichita East High School where he was a three-sport athlete in football, basketball, and track. He was a 2x City league champion in javelin and also the City league record. He attended the University of Iowa where he was a 2x All-American and 3x Big Ten Champion. He held the Big Ten record for two and half years and currently holds the University of Iowa Javelin school record. His highest finish at USA Championships was 2013 where he finished in 7th place.

Training schedule: Matt’s training schedule is pretty set in stone. Training and working a part time job can become quite the balancing act. All of his training is organized around his work schedule. Work is usually from 6:00am-12:00pm. Once work is over, he heads home to eat a good lunch and then heads to East High. His daily routine of training is Monday- Friday. At East, he completes lifting (strength training) and med ball throws. He follows that up with plyometrics (jump/power training) and sprints. Javelin is a very explosive, intense movement, so you have to train as such. His lifting consists of mostly Olympic lifts such as cleans, snatches, split snatches, squats, and bench. After the Olympic lifts are complete, he has auxiliary lifts that work the muscles specifically needed for javelin. The same theory applies when it comes to med ball throws – very javelin specific. Plyometrics and sprinting focus on intensity and aggressive speed. The combination of all of these is centered towards activating fast twitch muscles. Speed and strength will create the velocity needed to propel the javelin. Finally, he usually takes it easy on Saturday and Sunday. Matt also picks a day to do a light jog and shake out on the weekend. Along with actual strength and speed training, he has to do technical throw work. Currently he is throwing once a week. He usually picks a day where the weather in Kansas cooperates.

Diet: There isn’t necessarily a specific diet that he follows. It is more about staying away from junk food such as pop, sugar, fried food, etc. He tries to eat meat such as steak, chicken, and other lean protein sources such as fish. He makes a point to do most of the cooking at home to save money and calories. He believes for that keeping fruits and veggies in his diet plays a big role in keeping in good shape. He usually has a protein shake every morning that consists of kale, blueberries, raspberries, and protein powder. For lunch, it is pretty routine. He has a ham and turkey sandwich on wheat bread with yogurt and another fruit such as a banana. To keep hydrated, Matt sticks to mostly drink water and Gatorade.

Please follow and support Matt on his journey to Eugene, Oregon for the Olympic Trials, July 1-10, 2016.

Do you have a question about health, fitness or nutrition? Send it to Ask Laura, at futurist@shockertrackclub.com

Laura Markuly, MSE, ACSM HFS, NASM CES/PES/GFS, is an Exercise Physiologist and the owner of Bodyology Sports Performance, LLC. She also serves as the Futurist and Director of Volunteers for Shocker Track Club.